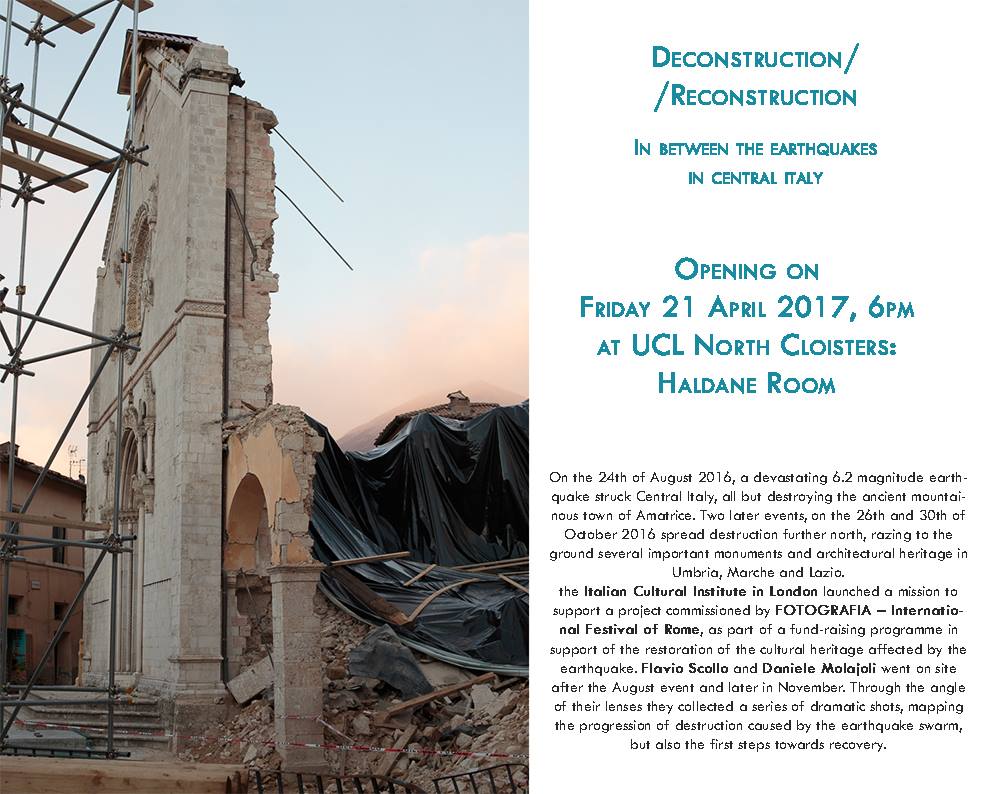 The Destruction – Reconstruction exhibition, which opened last fall at MACRO Museum in Rome and then has been already on display in London  at the Italian Cultural Institute , is now hosted by EPICEntre@UCL, the international centre of excellence for earthquake engineering research. The theme of reconstruction and recovery after a destructive earthquake is one of the central educational objectives of the International Master Programme in Earthquake Engineering and Disaster Management run by EPICentre. It is also central to the cross-disciplinary UCL Grand Challenges, focusing on research on Sustainable Cities and Human Wellbeing.
Opening on Friday 21 April 2017, 6pm, at UCL North Cloisters: Haldane Room

(keep reading)
On the 24th of August 2016, a devastating 6.2 magnitude earthquake struck Central Italy, all but destroying the ancient mountainous town of Amatrice. Two later events, on the 26th and 30th of October 2016 spread destruction further north, razing to the ground several important monuments and architectural heritage in Umbria, Marche and Lazio.
Following the August event, Academics and PhD students from EPICentre and IRDR, organised a two weeks’ reconnaissance mission to the region under the EEFIT banner (Earthquake Engineering Field Investigation Team, Institution of Structural Engineers) to record the geophysical and structural damage and analyse the consequences of the destruction.
In parallel the Italian Cultural Institute in London launched a mission to support a project commissioned by FOTOGRAFIA – International Festival of Rome, as part of a fund-raising programme in support of the restoration of the cultural heritage

affected by the earthquake. Flavio Scollo and Daniele Molajoli went on site after the August event and later in November. Through the angle of their lenses they collected a series of dramatic shots, mapping the progression of destruction caused by the earthquake swarm, but also the first steps towards recovery.